The sky of Salamanca is a mural painting. It was originally part of Biblioteca Histórica (Historical Library) from where it was partially transferred to one of the rooms of the Las Escuelas Menores where it is now. It has only one third of its approximately 400 square meters of original surface. 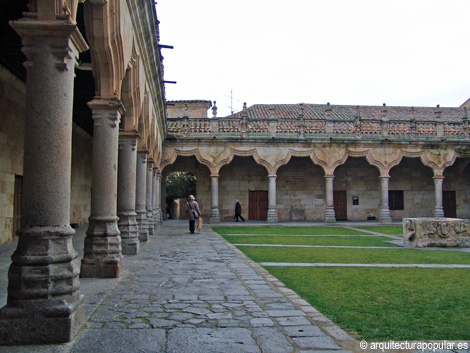 Las Escuelas Menores the bachelor’s degree was taught. With that degree you could in studding enter the University of Salamanca (Escuelas Mayores) and study any graduate or doctorate. It was, nevertheless, frequent that the children of artisans that obtained the bachelor, returned to their job or specialties with this title, since it allowed them to reach public positions with category of university degree.

The construction of this building in 1428 began. Different renovations and works through its history were made. Access is through a narrow cover located in one of the corners of the Schoolyard. The entrance, made in 1532, is formed by two semicircular arches that rest on a central column. It topped its upper part in a Plateresque solution like the main facade of the University, except the notable difference in size. After that door, an alleyway took the students to the large arcaded patio around which the schools were organized. In the first level, the patio is surrounded by a gallery of mixed arches on which there is a baroque balustrade. It is currently used as a museum, with several rooms dedicated to that use, exhibiting in one of them the Cielo de Salamanca.

It is a painting made by Fernando Gallego (Salamanca , c. 1440 – c. 1507), Spanish painter of the Spanish-Flemish school. Currently it is not in its original place. It occupied approximately one third of the vault of the old library of the University, today used as a chapel. During the works that were carried out after the fire that affected it in the 18th century losing its paintings and being this part hidden at four meters above the new one. In the mid-twentieth century the paintings were discovered and moved, once restored, to the University Museum that is on one of the rooms of the courtyard of the Escuelas Menores.

It is a mural painting in oil on gypsum plaster. The Sky of Salamanca represents the sky on August 18, 1475. It is an artistic collection of knowledge and tradition of the time on astronomy and astrology.
For the realization of this work Fernando Gallego was supported by the astronomical knowledge of the Professor of Astrology at the University of Salamanca Juan de Salaya.
In nowadays Juan de Salaya is well-known because in 1481 he was commissioned to translate into Spanish the “Perpetual Almanac” by Abraham Zacut. Zacut, who was the great astronomer of their time, was at that time living in Salamanca, although as a Jew he could not access teaching at the University (it was forbidden by Canon Law). However, this did not prevent him from collaborating in that translation with Salaya, whom he was a friend. However, the New Science Library has his name.

The Sky of Salamanca is represented in a quarter-sphere vault and partially framed by a Latin inscription of a well-known biblical psalm of King David that says: ” Quoniam videbo celos tuos opera digitorum tuorum, lunam et stellas quod tu fundasti” (For I will see your heavens, the work of your fingers; Moon and stars that You founded.)

Gallego’s painting represents the zodiac constellations of Leo, Virgo, Libra, Scorpius and Sagittarius, as well as other constellations such as the Boötes, Hercules, Serpens Caput, etc.. It includes a representation of the Sun on a chariot drawn by horses and another of the god Mercury on a chariot drawn by two eagles, the whole on four heads corresponding to the four winds.