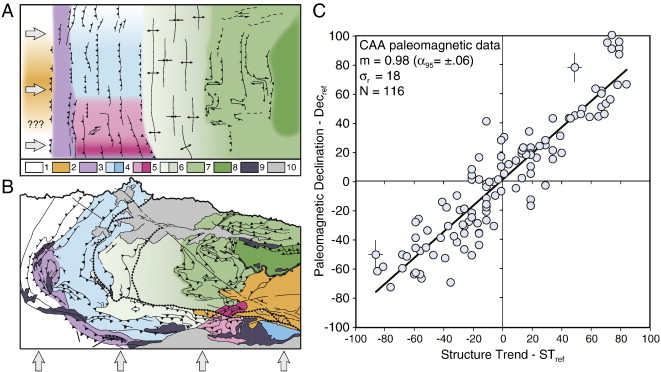 The Paleozoic Variscan orogeny was a large-scale collisional event involving amalgamation of multiple continents and micro-continents. Existing data, suggests oroclinal buckling of an originally near-linear convergent margin during the last stages of Variscan deformation in the late Paleozoic. Closure of the Rheic Ocean resulted in E–W shortening (present-day coordinates) in the Carboniferous, producing a near linear N–S trending, east-verging belt. Subsequent N–S shortening near the Carb-Permian boundary resulted in oroclinal buckling. This late-stage orogenic event remains an enigmatic part of final Pangea amalgamation.

The present-day arc curvature of the Variscan has inspired many tectonic models, with little agreement between them. While there is general consensus that two separate phases of deformation occurred, various models consider that curvature was caused by: dextral transpression around a Gondwana indentor; strike-slip wrench tectonics; or a change in tectonic transport direction due to changing stress fields. More recent models explain the curvature as an orocline, with potentially two opposite-facing bends, caused by secondary rotations. Deciphering the kinematic history of curved orogens is difficult, and requires establishment of two deformation phases: an initial compressive phase that forms a relatively linear belt, and a second phase that causes vertical-axis rotation of the orogenic limbs. Historically the most robust technique to accurately quantify vertical axis-rotation in curved orogens is paleomagnetic analysis, but recently other types of data, including fracture, geochemical, petrologic, paleo-current and calcite twin data, have been used to corroborate secondary buckling. A review of existing and new Variscan data from Iberia is presented that argues for secondary buckling of an originally linear orogenic system.

Together, these data constrain oroclinal buckling of the Cantabrian Orocline to have occurred in about 10 Ma during the latest Carboniferous, which agrees well with recent geodynamical models and structural data that relate oroclinal buckling with lithospheric delamination in the Variscan.