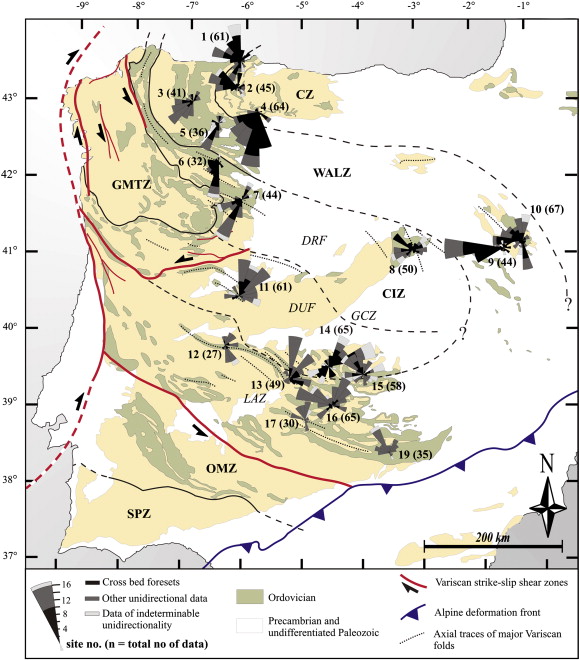 Coupled structural and paleomagnetic analyses have shown that the northern Iberian bend of the Variscan orogen, referred to as the Cantabrian Orocline, developed by vertical axis rotation of an originally linear orogen. However, palinspastic restoration of the orocline has proven difficult owing to (1) an unusually great orogenic width of over 700 km and (2) exposure of shallow water strata of the Gondwanan margin in the northern and southern portions of the orogen. We present paleocurrent data from Lower Ordovician shallow marine clastic sedimentary rocks across the Variscan of northern and central Iberia collected to constrain palinspastic restoration of the orogen. Paleocurrent data were collected from over 50 sites, and include cross bed foresets, ripple crests and casts, as well as rare ball and pillow structures, syn-sedimentary slump folds, and incised channels. Paleocurrent directions fan around the Cantabrian Orocline, are consistently oriented at a high angle to structural strike, and yield a consistent offshore direction outward from the oroclinal core. Similarly, changes in structural strike and paleocurrent direction across central Iberia imply the presence of a second more southerly orocline, the Central Iberian Orocline, that is continuous with, but convex in the opposite direction of the Cantabrian Orocline. Together, the Cantabrian and Central Iberian oroclines define an S-shaped pair of continental-scale buckle folds. Palinspastic restoration of the oroclines yields a linear continental margin > 1500 km long characterized by consistent offshore paleoflow to the west, defining a westerly oceanic domain (presumably the Rheic Ocean) and an easterly landward direction (presumably Gondwana). Recognition of the southern orocline explains the unusual width of the orogen, the geometry of aeromagnetic anomalies attributable to Variscan rocks, and is consistent with available structural data, paleomagnetic declination data, and the distribution of correlative Paleozoic and older rock sequences including shallow water strata of the Gondwanan margin. The S-geometry of the oroclines is similar to the Z-geometry of the Alaskan oroclines of the North America Cordillera, suggesting that as in the Cordillera, the Iberian oroclines may record a significant, margin-parallel translation event. 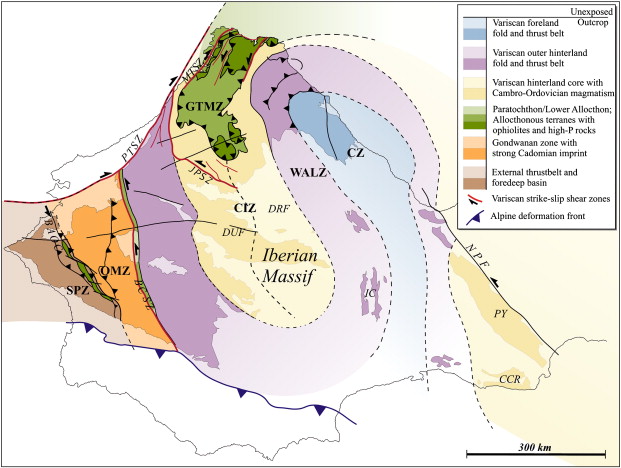