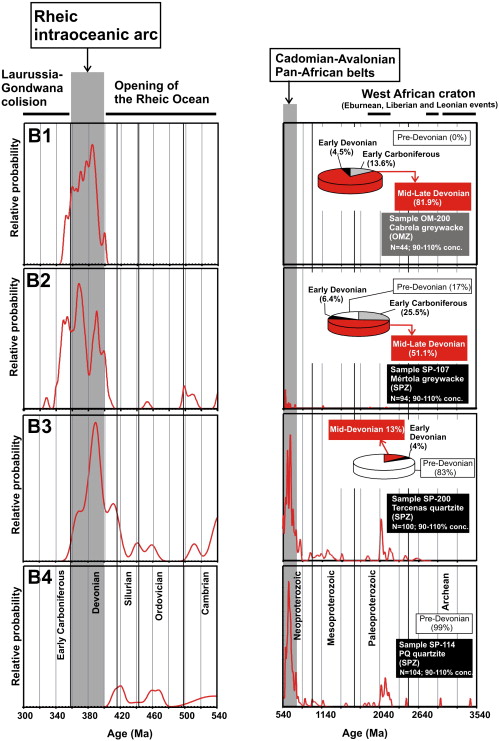 Early Carboniferous turbiditic sedimentary rocks in synorogenic basins located on both sides of the Rheic suture in SW Iberia were studied for provenance analysis. An enigmatic feature of this suture, which resulted from closure of the Rheic Ocean with the amalgamation of Pangea in the Late Carboniferous, is that there are no recognizable mid- to Late Devonian subduction-related magmatic rocks, which should have been generated during the process of subduction, on either side of it. U–Pb LA–ICP-MS geochronology of detrital zircons from Early Carboniferous turbidites in the vicinity of the Rheic suture in SW Iberia, where it separates the Ossa–Morena Zone (with Gondwana continental basement) to the north from the South Portuguese Zone (with unknown/Meguma? continental basement) to the south, reveals the abundance of mid- to Late Devonian (51–81%) and Early Carboniferous (13–25%) ages. The Cabrela and Mértola turbidites of the Ossa–Morena and South Portuguese zones, respectively, are largely devoid of older zircons, differing from the age spectra of detrital zircons in the oldest (Late Devonian) strata in the underlying South Portuguese Zone, which contain abundant Cambrian and Neoproterozoic ages. Mid- to Late Devonian zircons in the Cabrela Formation (age cluster at c. 391 Ma, Eifelian–Givetian transition) and Mértola Formation (age clusters at c. 369 Ma and at c. 387 Ma, Famennian and Givetian respectively) are attributable to a source terrane made up of magmatic rocks with a simple geological history lacking both multiple tectonic events and older continental basement. The terrane capable of sourcing sediments dispersed on both sides of the suture is interpreted to have been completely removed by erosion in SW Iberia. Given that closure of the Rheic Ocean required subduction of its oceanic lithosphere and the absence of significant arc magmatism on either side of the Rheic suture, we suggest: 1) the source of the zircons in the SW Iberia basins was a short-lived Rheic ocean magmatic arc, and 2) given the lack of older zircons in the SW Iberia basins, this short-lived arc was probably developed in an intra-oceanic environment. 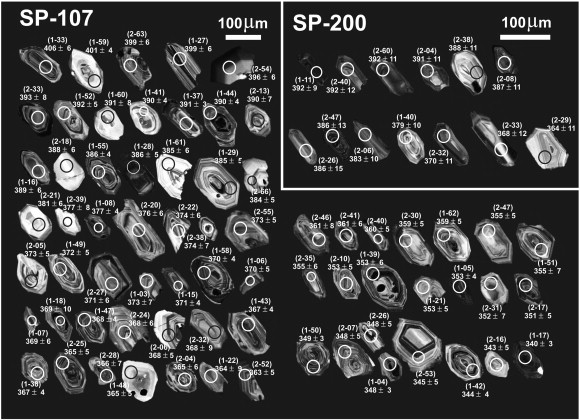