Field, petrographic, geochemical and geochronological studies carried out in northwest Iberia constrain the nature and origin of the Ediacaran magmatic rocks cropping out in the Narcea Antiform. The results indicate the presence of a long-lived subduction-related magmatic arc between ca. 580 and ca. 560 Ma in two tectonic units. Magmatic rocks in the Allande Group are major intrusive calc-alkaline bodies and limited volcanic rocks. In the Eastern Navelgas Group, there are no intrusive bodies and volcanic rocks are widespread and represent large edifices exposed over tens of square km. Sm–Nd and Rb–Sr geochemical isotopic data indicate derivation of the magmatic rocks of both units from a ca. 1.1 Ga lithospheric mantle as well as varying degrees of crustal contamination. Geocronological U–Pb (LA–ICP-MS and ID-TIMS) data constrain the magmatic activity to 575–565 Ma in the Allande Group and to ca. 560 Ma in the Navelgas Group. Further constraints on the evolution of the magmatic arc have been obtained from the study of pebbles in early Cambrian conglomerates that were derived from the magmatic rocks of these Ediacaran units. We interpret these Ediacaran units to have been formed in a back-arc environment in the Narcea Antiform, and to record a multi-stage evolution along this segment of the northern Gondwana magmatic arc as revealed by their isotopic and geochronological differences. 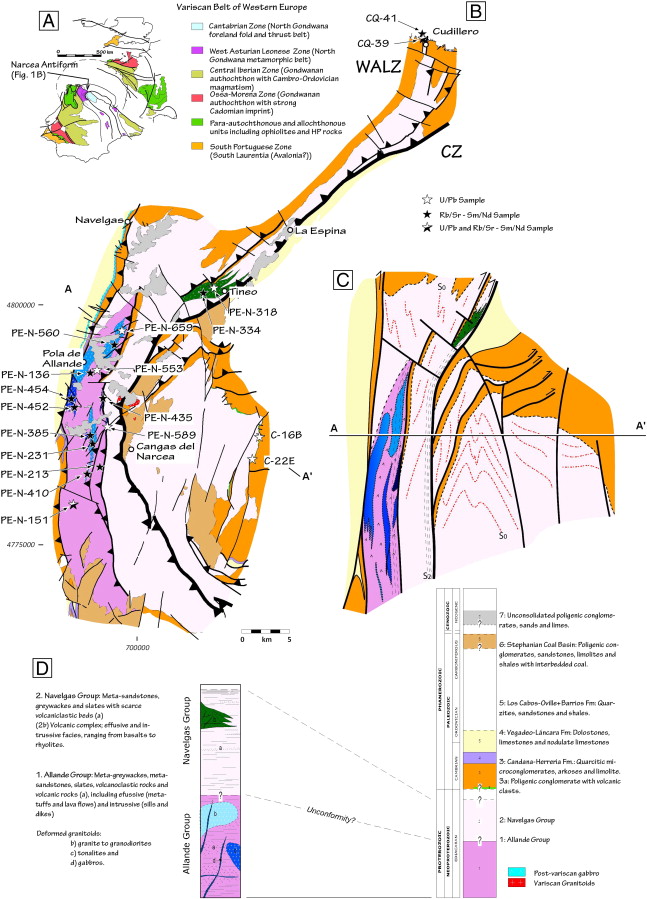