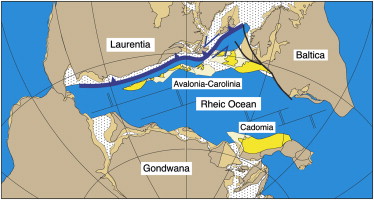 The Rheic Ocean was one of the most important oceans of the Paleozoic Era. It lay between Laurentia and Gondwana from the Early Ordovician and closed to produce the vast Ouachita-Alleghanian-Variscan orogen during the assembly of Pangea. Rifting began in the Cambrian as a continuation of Neoproterozoic orogenic activity and the ocean opened in the Early Ordovician with the separation of several Neoproterozoic arc terranes from the continental margin of northern Gondwana along the line of a former suture. The rapid rate of ocean opening suggests it was driven by slab pull in the outboard Iapetus Ocean. The ocean reached its greatest width with the closure of Iapetus and the accretion of the peri-Gondwanan arc terranes to Laurentia in the Silurian. Ocean closure began in the Devonian and continued through the Mississippian as Gondwana sutured to Laurussia to form Pangea. The ocean consequently plays a dominant role in the Appalachian-Ouachita orogeny of North America, in the basement geology of southern Europe, and in the Paleozoic sedimentary, structural and tectonothermal record from Middle America to the Middle East. Its closure brought the Paleozoic Era to an end. 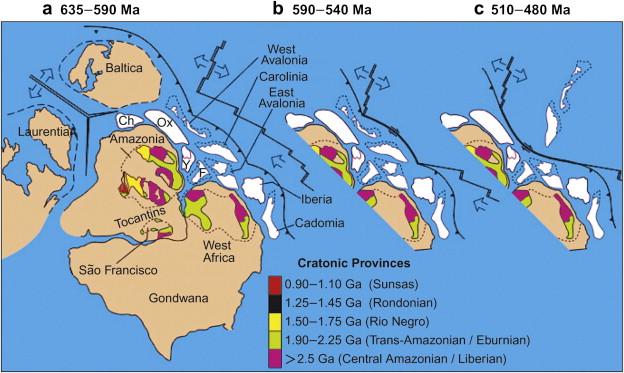