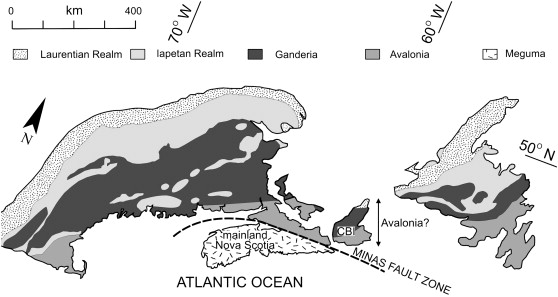 Recent studies have shown that the sub-continental lithospheric mantle (SCLM) can either underlie regions for a long period of time or be replaced during delamination or plume magmatism. The occurrence and timing of mantle replacement may be identified by comparing the Sm-Nd isotopic signature of suites of basaltic rock within the same terrane over a range of time. In mainland Nova Scotia, the early Jurassic North Mountain Basalt (NMB) is widely recognized as the northernmost representative of the Central Atlantic Magmatic Province (CAMP), but it could also have been derived from the underlying SCLM (Avalonian) mantle. The Sm-Nd isotopic data from the NMB yield εNdt values (t = 200 Ma) ranging from + 0.1 to − 2.7. These values are significantly lower than the contemporary depleted mantle and indicate derivation from the underlying Proterozoic SCLM, rather than from the CAMP plume. Comparison with older mafic magmatic events indicates that the SCLM is isotopically indistinguishable from that inferred to yield Ordovician and Devonian mafic magmas in the Meguma terrane and Neoproterozoic to Devonian magmas in the Avalon terrane. These data indicate that the same SCLM underlay mainland Nova Scotia from Neoproterozoic to Jurassic times, and that Paleozoic tectonic events did not significantly detach the mantle from the overlying crust. 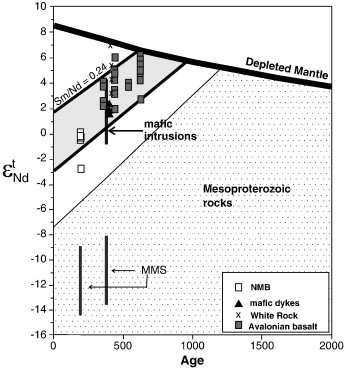