Detrital zircons from late Neoproterozoic rocks of the peri-Gondwanan Cadomian belt of SW Iberia and north Armorican Domain of Brittany record Neoproterozoic (ca. 860–550 Ma), Palaeoproterozoic (ca. 2300–1800) and Archaean (ca 3300–2600 Ma) U–Pb ages. The absence of Mesoproterozoic zircons suggests that these terranes evolved in a peri-W African realm. This is in contrast to other western European terranes that preserve Mesoproterozoic zircons and are likely to have evolved in a peri-Amazonian realm. Such a contrast in detrital zircon populations, coupled with the presence of Mesoproterozoic zircons in the Ordovician Armorican quartzite, deposited in a peri-African platform, is interpreted to record along-marginterranetransport. The change in provenance suggests that subduction was replaced by transform faults that juxtaposed Amazonia-derived terranes against W Africa-derived terranes to form the Avalonia and Armorica microcontinents. Subsequent extension along the margin resulted in the birth of the Rheic Ocean and the outboard drift of Avalonia. 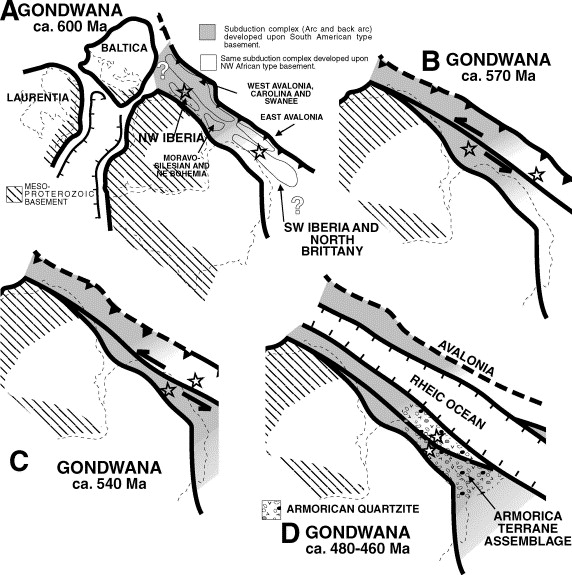