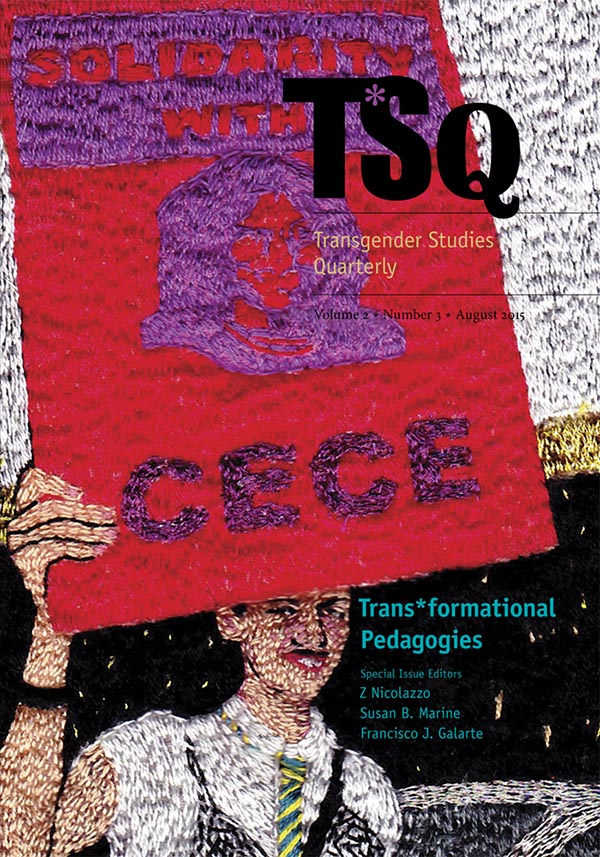 At the heart of European modernity lies the inscription of the transsexual body.

For The Europa Issue of TSQ, we invite your response to this provocation through research articles of 4000-6000 words as well as reports from the field (e.g. legal and medical case studies, social policy documents, historical vignettes, philosophical texts, conference reports, works of art, cultural and media production, life writing, ethnography, and so on) that engage with a range of methods, lineages and practices, from 1000 to 4000 words in length.

Since the mid-nineteenth century, European empiricism has organized knowledge production according to strictures of observing material ‘truths’ in Nature, birthing manifold practices for studying human beings. The modern Western European worldview remains inextricably linked to this rise in the stature of the Human Sciences and its preoccupation with registering the difference between bodies and developing representational practices for their social classification, moral hierarchization, and ranking as human, subhuman, and non-human. The regulation of “social monstrosity” provided the ground for “regimes of normalization” to sprout and spread across all of society (Foucault, Les Abnormaux, 1974-1975; Stoler, Race and the Education of Desire, 1995). The legitimation of formal and informal forms of governance of these regimes seeded the development of sciencia sexualis, psychiatry, endocrinology, surgery and other medical fields engaged in not only the social regulation of newly identified populations but also the “better breeding” programs of Nation-States furthered by the academic discipline of eugenics. It was in this milieu that the elaboration of the sexological sciences, studying what we would now call “transgender phenomena” (Stryker, “(De)subjugated Knowledges,” 2006), was lead by European figures such as Richard von Krafft-Ebbing with his taxonomy of social deviance, Karl von Westphal and his concept of contrary sexual sentiments, Magnus Hirschfeld and his terminology of transsexualismus, or Havelock Ellis’s notion of eonism. In the wake of the twentieth century’s fascism occurring in and across various parts of Europe and its colonies, sex scientists like Harry Benjamin, together with their concepts for cross-sex and -gender identification, found refuge mainly in the United States. As a consequence, the official terms of medical pathologization — transexualism, gender identity disorder, and gender dysphoria — took root in North American private clinics and university programs. This special issue departs from this historical background while at the same time challenging the hold of “European” knowledge production and its traditions in two interrelated clusters of approaches.

First, we aim to interrogate the origin story of the study of transgender phenomena in Europe. We call for contributions that address questions such as the following: What does the study of trans-Atlantic exchanges of ideas and concepts on transgender phenomena bring to our understanding of how transgender has been formulated and regulated? How might investigating the ‘early’ study of transgender as phenomena complicate the narratives of pathologization and inform present-day struggles for the project of “depathologization” of trans identities, gender variance and gender non-conforming persons around the world (Cabral, Suess, Ehrt, Seehole, and Wong, “Removal of gender incongruence of childhood diagnostic category: a human rights perspective,” 2016)? Beyond the archive of a seemingly European history of the study of transgender phenomena, we also call for contributions that refer to what Foucault (Foucault, Il faut défendre la société, 1975-1976) has called “subjugated knowledges,” including what Stryker (2006) has instructively referred to as the basis of transgender studies, thus, to local and historical accounts that have been excluded from the systematization of knowledges that aim at producing coherence by disqualifying embodied knowledge as non-scientific or inferior.

Second, this special issue invites contributions that focus on “provincializing” and “de-centring” European inflections of transgender studies (Chakrabarty Provincializing Europe: PostColonial Thought and Historical Difference, 2000; Kulpa and Mizielińska, De-Centring Western Sexualities: Central and Eastern European Perspectives, 2011). The archives of sexology, anthropology, religion, and law attest to the Eurocentric fascination with and genocidal European practices of exterminating “deviant” or “unnatural” forms of embodiment, claims to gender identity, and social structures for them in cultures within and outside Europe in the context of colonization and imperialism. We welcome contributions that critically scrutinize the impacts of the term ‘transgender,’ what its colonial legacies are, how the term is circulating locally and globally, and how race, ethnicity, class, and geo-political location complicate its circulation and “vitalizes” trans studies and activism (Snorton and Haritaworn, “Trans Necropolitics: A Transnational Reflection on Violence, Death, and the Trans of Color Afterlife,” 2013; Haritaworn, Queer Lovers and Hateful Others: Regenerating Violent Times and Places, 2015). In coordination with European postcolonial and decolonizing projects that also question temporalities/timelines of modernity, what particular insights does a trans optics yield? In this cluster we suggest the method of provincializing and de-centring to be applied to an area (where lies Europe, in what does it consist?) and, also in turn to the related epistemological tradition (what is European trans studies, in what does it consist?).

Thus, we invite contributors to query the institutionalization of transgender studies. We place this call at a time in which European citizens and newcomers are faced with a resurgence of fascisms. How is trans studies and theory vested with Eurocentric privilege, and how is it contested by various racialized, ethnicized, colonized and diasporic communities from outside and within Europe? What are the different terms/ways by which we should evaluate “trans studies” in the European context, where both pathologizing and depathologizing activity occurs? What narratives and case studies challenge the assumption that the ‘center’ of Europe initiates progressive historical change, which the ‘margins’ of Europe would follow? What kinds of hegemonies operate in European gender, sexuality and race studies that impact the ways interdisciplinary transgender studies has developed? Here we call for special attention to Post-Soviet and post-socialist nationalisms, the formation of the European Union and its funding schemes, to different mobilities and patterns of migration, and to language use within Nation-States and between them.

In line with the aim of this special issue and given the fact that TSQ is an English-language peer-reviewed academic journal based in the United States, we encourage authors to contact the editors if they wish to write in a non-English language. We will be able to translate at least one submission that following peer-review is accepted into the issue (in the case where an author does not have access to university funding for translation).

The deadline for submissions is July 1, 2019. All manuscripts should be prepared for anonymous peer review with scholarly citations in Chicago author-date citation style. Any questions should be addressed by e-mail to both guest editors for the issue: Yv E. Nay(yvnay@email.arizona.edu) and Eliza Steinbock (e.a.steinbock@hum.leidenuniv.nl). We plan to respond to submissions by August 2019. Final revisions will be due by November 26, 2019. TSQ accepts submissions without regard to academic affiliation or rank; artists, activists, and graduate students are also welcome to submit materials for consideration.

To submit a manuscript, please visit http://www.editorialmanager.com/tsq. Please note that TSQ does not accept simultaneous submissions. Manuscripts proposed for this issue cannot be submitted elsewhere until editorial decisions are sent out. If this is your first time using Editorial Manager, please register first, then proceed with submitting your manuscript. You may address any technical or formatting queries to tsqjournal@gmail.com. All manuscripts should be double-spaced, including quotations and endnotes, and anonymized throughout. Please include an abstract (150 words or less), keywords (3-5 for indexing), and a brief author’s biographical note (50 words or less) at the time of initial submission. See http://www.dukeupress.edu/Assets/Downloads/TSQ_sg.pdf for a detailed style guide.

TSQ: Transgender Studies Quarterly is co-edited by Francisco J. Galarte and Susan Stryker, and published by Duke University Press, with editorial offices at the University of Arizona’s Institute for LGBT Studies. TSQ aims to be the journal of record for the interdisciplinary field of transgender studies and to promote the widest possible range of perspectives on transgender phenomena broadly defined. Most issues of TSQ are themed special issues, with one open call issue each year; all issues contain regularly recurring features such as reviews, interviews, and opinion pieces. https://lgbt.arizona.edu/transgender-studies-quarterly.