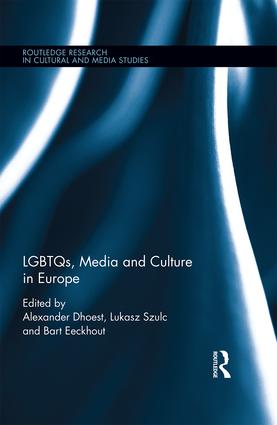 Media matter, particularly to social minorities like lesbian, gay, bisexual, transgender and queer people. Rather than one homogenised idea of the ‘global gay’, what we find today is a range of historically and culturally specific expressions of gender and sexuality, which are reflected and explored across an ever increasing range of media outlets. This collection zooms in on a number of facets of this kaleidoscope, each chapter discussing the intersection of a particular European context and a particular medium with its affordances and limitations. While traditional mass media form the starting point of this book, the primary focus is on digital media such as blogs, social media and online dating sites. All contributions are based on recent, original empirical research, using a plethora of qualitative methods to offer a holistic view on the ways media matter to particular LGBTQ individuals and communities. Together the chapters cover the diversity of European countries and regions, of LGBTQ communities, and of the contemporary media ecology. Resisting the urge to extrapolate, they argue for specificity, contextualisation and a provincialized understanding of the connections between media, culture, gender and sexuality. Alexander Dhoest is associate professor in Communication Studies at the University of Antwerp, Belgium. His research explores the significance of popular media culture in relation to social identities, focusing in particular on media and diversity. Lukasz Szulc is a Postdoctoral Fellow of the Research Foundation Flanders at the University of Antwerp, Belgium, and the Marie Curie Fellow in the Media and Communication Department at the London School of Economics and Political Science, UK. Bart Eeckhout is professor of English and American Literature at the University of Antwerp, Belgium. He studied at Columbia University and Ghent University and has been a visiting professor at Fordham University and New York University, USA. He is a NIAS Fellow-in-Residence for the academic year 2016-17.

Foreword Richard Dyer Introduction Alexander Dhoest, Lukasz Szulc and Bart Eeckhout Part I. Histories of Representation in Mass Media and Beyond 1. Respectably Gay: Homodomesticity in Ireland’s First Public Broadcast of a Homosexual Couple Páraic Kerrigan 2. Breaking the Silence: The Early Portuguese Lesbian Press Ana Maria Brandão, Tânia Cristina Machado and Joana Afonso 3. ‘I Am My Own Special Creation’: Sexual and Gender Differences in the Music Performances of an Antwerp Drag Show Company Robbe Herreman and Alexander Dhoest Part II. Media Consumption, Identification and Role Models 4. Coming Out in the Digital Age: The Opportunities and Limitations of Internet Use in Queer-Lesbian Coming-Out Experiences in Germany Ulrike Roth 5. ‘I Think I’m Quite Fluid with Those Kinds of Things’: Exploring Music and Non-Heterosexual Women’s Identities Marion Wasserbauer 6. ‘I Worry That They’ll Pick on Someone I Care about’: Trans People’s Perceptions of the British Mass Media and Its Impact on Their Mental Health and Well-Being Louis Bailey, Jay McNeil and Sonja J. Ellis Part III. LGBTQs as Producers in the Digital Age: Blogging 7. Safe Space, Dangerous Space: Counterpublic Discourses in the Russian LGBT Blogging Community Evgeniya Boklage 8. Is the Pope Judging You? Digital Narratives on Religion and Homosexuality in Italy Giulia Evolvi 9. Contesting Hegemonic Gender and Sexuality Discourses on the Web: A Semiotic Analysis of Latvian and Polish LGBTQ and Feminist Blogs Joanna Chojnicka Part IV. Discourses on and by LGBTQs on Social Media 10. Homosexuality on Dutch and Flemish Facebook Pages: Situational Meanings, Situational Attitudes? Tim Savenije 11. Gay the Correct Way: Mundane Queer Flaming Practices in Online Discussions of Politics Jakob Svensson 12. ‘I Sort of Knew What I Was, So I Wanted to See What Awaited Me’: Portuguese LGB Youngsters and Their Situated Experiences with New Media Daniel Cardoso Part V. Self-presentation and Intimacy on Online Dating Sites 13. Exploring Networked Interactions through the Lens of Location-Based Dating Services: The Case of Italian Grindr Users Lorenza Parisi and Francesca Comunello 14. New in Town: Gay Immigrants and Geosocial Media Andrew DJ Shield 15. Strategic (In)visibilities and Bareback Subcultures: The Implications of Online Communication for HIV Transmission among Gay Men in Serbia Zoran Milosavljevic Afterword: Writing at the Precipice Sharif Mowlabocus